Last Thursday, AGGS held a fascinating talk on re-generation for Y9s to 13s, as part of this year’s science-fiction theme of the science behind the reality of science fiction. It was really amazing to see how animals could grow new limbs, despite their original limb being amputated.

To begin with, Ms Burbidge presented a power point which gave some insight into the actual science of how animals grow back their limbs, such as a salamander tail. The stem cells (cells which are not differentiated and are unspecialized) heal the wound and then begin growing upon it, and finally proliferating (a rapid cell growth) which is needed to regain the limb quickly, as it is key to its survival. The stem cells create new cells via mitosis, part of the cell cycle where they split into 2 daughter cells, carrying DNA with it. What is particularly fascinating about this, is that the body has an actual memory of what the limb was before and therefore the stem cells can quickly re-grow into a new limb which is accurately formed.

This led on to the main PowerPoint by Dr Elli Marinopoulou from Manchester University, based around re-generative medicine. The main reason that humans cannot re-grow limbs like amphibians can is that the rapid, uncontrolled growth of cells in one area is classed as cancer, as some of the stem cells become damaged or defective, and can lead to tumour formation. This is however where re-generative medicine comes in, as by studying amphibians who can re-grow limbs can help find a cure for cancer, finding out how it is prevented. Towards the end, she also described her time as a researcher, and how the scientific research process works, which was particularly intriguing as it gave an insight into the career, perhaps something some of us may consider in the future.

Thank you to Dr Elli Marionopoulou for joining us via Zoom for a fascinating talk on this, and to the teachers for organizing it! 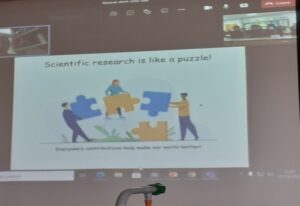 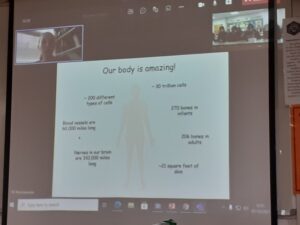